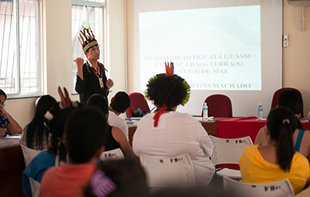 This afternoon 20 November 2015 was a milestone for the inclusion of the indigenous population at the Federal University of Pará (UFPA). After defending his thesis, Almires Martins Machado, of the Guarani, is the first Indian to receive the title of doctor at the institution, with the work titled "Dreams to Oguatá Guassú: in search of the Land (s) (s) Free. The presentation took place in a room full of Congregation, Institute of philosophy and Humanities (IFCH), with the presence of teachers, students and other indigenous, as well as local television media.

The work of Almires, guided by Professor Jane Bertrand, in the graduate program in Anthropology (PPGA), IFCH, focussed on the history of his people. "When I said in my village who would do a thesis, they told me ' now you're going to write our story, in a way that whites understand '," said the doctor.

Thesis-Leaving of this purpose, the author told me about the migration of the Guarani, who came out of Northeastern in Argentina, until you reach the Stop, in search of what they call "land without evil". To clarify the motives of his people, Almires talked about the worldview of the Guaranis and the meaning of these changes of address, in which the Earth inhabited, strange place, becomes ressignificada, Humanized, "guaranizada", a walk in search of good living. Commenting on the culture of his people, he also denied Ethnology understandings made by non-natives about the natives. "We need to rethink what has been said and written about us," he stressed.

Collective-just as the topic of his thesis was decided by the community, the writing was also, in a way, press conference, with the participation of all in the accounts of the history of the people. "The writing of this work is mine, but the ideas presented were all discussed with the community. Until the final version of the thesis underwent a revision of the village, "she said.

Similarly, the entry of Almires in higher education was decided by the community. "I was chosen by the Board of old, that defined that I would be the person from our village who should go to College to learn the thought of white. Now, as a University professor, the expectation is that being inside me to give more and more to bring more indigenous conditions here. "

Affirmative policies – all Almires's trajectory was related with affirmative policies for indigenous peoples, since their law degree, at the Centro Universitário da Grande Dourados (Sabah Credit Corporation), Mato Grosso do Sul, to the master's degree in human rights and a doctorate in anthropology in UFPA. The Federal do Pará has pioneered reserve vacancies to indigenous and black people in their graduate programs.

Almires considers his PhD a response to society. "This shows our ability to arrive at any level. We just need public policies, opportunities, "he said.

Banking-Composed the Review Board of Defense, in addition to the guidance counselor, Professor Jane Bertrand, teachers, doctors, Eremites of Universidade Federal de Pelotas (UFPEL), and Mauro Cezar Coelho, Márcio Christian Henry and Cristina Donza Cancels, the UFPA. The evaluators stressed the quality of the work and its relevance to any interested indigenous themes.

For guidance, the thesis is very important because it presents the story from the point of view of the Guarani, and not from the point of view of non-indigenous. "There is a very sick literature about the Guarani, but not made by themselves," he recalled. For her, Almires is just the first of many Indians who will still receive the title of doctor in UFPA. "The path traversed by him is the demonstration that, despite all the mishaps that indigenous peoples spend to reach the University, they diplomam for their own ability and experience you have. Slots reservation policies work, we have to bet on them more and more, "celebrated.